During the years 2012-2015, I wrote a number of articles on the urgent problems which the world is facing today, and also discussed the solutions that are available to us. Most of these articles were published by Countercurrents, TMS Weekly Digest and Human Wrongs Watch. A few appeared on Waging Peace, the website of the Nuclear Age Peace Foundation, and in Erudito and Cadmus, (which are journals of the World Academy of Art and Science), or on the website the Learning Development Institute.

The long essay, “Against the Institution of War”, was first published by the Pari Center for New Learning. I am extremely grateful to Editors Binu Mathiew, Antonio C.S. Rosa and Baher Kamel, Professors Ivo Slaus, Gary Jakobs and David Peat, and also to Dr. David Krieger and Dr. Jan Visser for their great kindness and encouragement.

Three collections of these articles and essays will be published by Irene Publishing (irenepublishing.com/). Volume 3 is already available on Amazon, and the other volumes will be there within a month or so. www.amazon.co.uk/dp/1326484362/ref=dra_a_rv_ff_fx_xx_P2000_1000?tag=dradisplay0bb-21&ascsubtag=b677bbfde12d1dd9c5b553ede3953d12_S 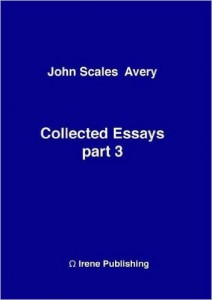 The essays in Volume 3 include:

1) FEDERALISM AND GLOBAL GOVERNANCE;
2) THE DEVIL’S DYNAMO;
3) THE COURT OF WORLD PUBLIC OPINION;
4) CLIMATE CHANGE, WILL A DISASTER WAKE US UP?;
5) BOOK REVIEW, “HIROSHIMA, AUGUST 6, 1945, A SILENCE BROKEN”;
6) THE MARSHALL ISLANDS SUE ALL NUCLEAR NATIONS FOR VIOLATION OF THE NPT’S ARTICLE VI; 7) SCIENCE, RELIGION AND WAR;
8) INTERNATIONAL DAY FOR THE TOTAL ABOLITION OF NUCLEAR WEAPONS;
9) KILLING CIVILIANS;
10) 60 YEARS IN THE PEACE MOVEMENT;
11) LIMATE CHANGE MEANS LIFESTYLE CHANGE;
12) THE AGONY OF IRAQ;
13) THE UNITED NATIONS CLIMATE SUMMIT;
14) INTERRELATED THREATS TO HUMANS AND THE BIOSPHERE;
15) BIRGITTA JONSDOTTIR, DEMOCRACY, AND FREEDOM OF INFORMATION;
16) INSTITUTIONAL AND CULTURAL INERTIA;
17) POLITENESS IN MULTI-ETHNIC SOCIETIES;
18) SOME CONTRIBUTIONS OF ISLAMIC CULTURE;
19) QUICK ACTION IS NEEDED TO SAVE THE LONG-TERM FUTURE;
20) REMEMBER YOUR HUMANITY;
21) GANDHI AS AN ECONOMIST;
22) SECRECY AND DEMOCRACY ARE INCOMPATABLE;
23) EUROPE MUST NOT BE PUSHED INTO A NUCLEAR WAR WITH RUSSIA;
24) MILLAY’S “EPITAPH FOR THE RACE OF MAN”;
25) BOOK REVIEW: “THE PATH TO ZERO”:
26) ALBERT EINSTEIN, SCIENTIST AND PACIFIST; EXPONENTIAL GROWTH;
27) NEW HOPE FOR AVOIDING CATASTROPHIC CLIMATE CHANGE;
28) WILL THE REAL ISSUES BE DISCUSSED IN 2016?;
29) DEBT SLAVERY;
30) GREED IS DRIVING US TOWARDS DISASTER; A NUCLEAR WEAPONS CONVENTION BY MAJORITY VOTE AT THE UN;
31) THE EVOLUTION OF COOPERATION
32) SAVING THREATENED SPECIES.

Hon. Matt Robson, New Zealand Minister for Disarmament and Arms Control 1999, has read Part 1, and he was kind enough to write the following comments: “COLLECTED ESSAYS PART IJohn Avery I know John Avery as a scholar and an advocate of peace. If the Old Testament command of an eye for an eye is followed, the whole world will be blind. A far better path for humanity, as John shows in the Essays, is to apply the tools of reason, science and morality to eliminate the underlying causes of war and poverty. John puts before us the apalling fact that trillions are spent on war and destruction while only a fraction of that wealth produced by humanity is given to the basic needs of all humanity. In such a world, the rich die of cholesterol, the poor of anaemia.

John places [highly] the philosophies of cooperation and solidarity for all human beings, regardless of nationality or belief, practiced by the warriors for peace and non-violence such as Gandhi and Thoreau, and demonstrated that a better and peaceful world is possible. John reminds us that if the fundamental morality of the great religions were adhered to, war would be impossible.

These Essays are an excellent contribution to all those who are working to free the world of war and poverty, and to create a world based on the solidarity of all its peoples.” I am extremely grateful to Matt of this support, and for all the wonderful work that he has done for the cause of peace, international understanding and nuclear disarmament. I very much hope that my writing will also make a contribution. We must work together to save human civilization and the biosphere from the twin threats of nuclear war and climate change.

Together we can do it.