Dear friends and colleagues I’m writing to let you know about Scientists for Global Responsibility’s latest in-depth report – which I’ve attached as a pdf. It’s called: ‘Irresponsible Science? How the fossil fuel and arms industries finance professional engineering and science organisations’ SGR_IrresponsibleScience.pdf The report was published earlier this month and received coverage in, for example, ‘The Sunday Times’.* It reveals an extensive pattern of financial links between the arms and fossil fuel industries on the one hand, and some … END_OF_DOCUMENT_TOKEN_TO_BE_REPLACED 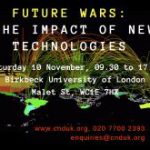 A 1 day conference held at London Birkbeck University, Saturday 10 November 2018 by Dave Webb This was a timely and important conference which followed closely media reports on the ways in which technology may change the nature of the way in which war will be fought in the future. For example, the Independent (https://www.independent.co.uk/news/uk/home-news/future-war-robot-soldiers-enhanced-humans-space-gene-editing-ministry-of-defence-a8583621.html) reported on a Ministry of Defence report predicted that robot soldiers and ‘enhanced’ humans will fight future wars, and technological advances will see new frontiers … END_OF_DOCUMENT_TOKEN_TO_BE_REPLACED

As you know the European Commission in 2017 took the unprecedented step by proposing a European military research programme of 40 billion euros for the next ten years. The establishment of a EU military research programme points towards an unprecedented acceleration in the militarisation of the EU and will divert funds from other research areas. These steps will not increase peace and security. On the contrary, they will only worsen global tensions. In the meantime, scientific research which might actually … END_OF_DOCUMENT_TOKEN_TO_BE_REPLACED

Europe’s researchers should take a principled stand against the new military R&D programme. The EU was created to preserve peace; it will not be peaceful anymore, says Dave Webb, of the UK Campaign for Nuclear Disarmament

A report from Arielle Denis, Amela Skiljan und Reiner Braun actually in New York: Historical : The courage to ban the bomb! Today, as a result of a resolution supported by the overwhelming majority of States and after years and years of civil society advocacy, the negotiations over “a legally binding instrument to prohibit nuclear weapons and lead to their total elimination” started in the UN headquarters in New York. This historical achievement will create a clear stigma on the … END_OF_DOCUMENT_TOKEN_TO_BE_REPLACED