Born on 25 May 1921 in Bade Kissingen, Germany On 12 December, the physicist Jack Steinberger died at the age of 99. As a young man, he had to and was able to leave Germany during the fascist era. Persecuted again during the Mach Carthy era, he left the USA and was awarded the Nobel Prize in Physics in 1988.

Jack Steinberg’s life was marked by a deep and never-ending search for scientific knowledge and truth. His commitment to passing on his knowledge to the next generations was tireless.

For him, science was inseparably linked with social and individual responsibility. Alarmed by the atomic bombs dropped on Hiroshima and Nagasaki, he spent a lifetime in the peace movement. His goal, which he advocated tirelessly and fearlessly, was a world without nuclear weapons and war. He abhorred war from the bottom of his heart. This commitment brought him to the International Network of Engeneers and Scientists, of which he became a founding member and long-time supporter and sponsor. He was active for and with INES until his old age.

We will miss him and his activities  in the future we will have to fight alone against nuclear weapons and war for a peaceful and just world.

TUESDAY, NOVEMBER 24: What’s next for the US-India strategic partnership?

REGISTRATION TO BE POSTED SOON.

TUESDAY, NOVEMBER 10: The Non-Proliferation Treaty at 50: A Mid-Life Crisis?

Biden or Trump: What’s at Stake on November 3?

Once you register, a link will be automatically emailed. Thank you! Please email with any questions.

The Bang and the Bucks:  Post-9/11 Military Spending and the Shortchanging of Other Urgent Needs

Once you register, a link will be automatically emailed. Thank you! Please email with any questions. 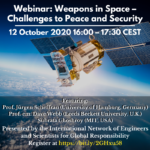 Invitation INES Webinar on Weapons in Space – Challenges to Peace and Security 12 October, 16:00 – 17:30 CEST With: Prof. Jürgen Scheffran (University of Hamburg, Germany) Prof. em. Dave Webb (Leeds Beckett University, U.K.) Subrata Ghoshroy (MIT, USA)   Registration: https://us02web.zoom.us/webinar/register/WN__s5nreJXQQKp0p9q-bbTXw Introduction: When President Trump established the U.S. Space Force December, 2019, he said that it marked “a big moment” and that there was “going to be a lot of things happening in space. Because space is the world’s … END_OF_DOCUMENT_TOKEN_TO_BE_REPLACED 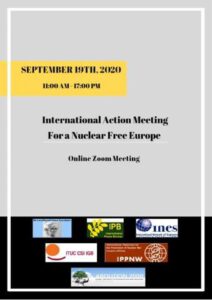 Since the nuclear bombing of Hiroshima and Nagasaki 75 years ago we have lived under the threat of nuclear annihilation. This omnicidal power and the outrageous amount of resources spent on it is unacceptable, especially at a time where climate change is challenging our survival. The COVID-19 pandemic and the recession which will follow, teach lessons we must embrace to overcome the existential threats of the 21st century: nuclear war and global warming. END_OF_DOCUMENT_TOKEN_TO_BE_REPLACED END_OF_DOCUMENT_TOKEN_TO_BE_REPLACED

Here is the link to the video from yesterday’s event. There were more than 50 people, mostly MIT students. We were thrilled.